How Social Media Is Changing the Way We Do Politics in Europe? 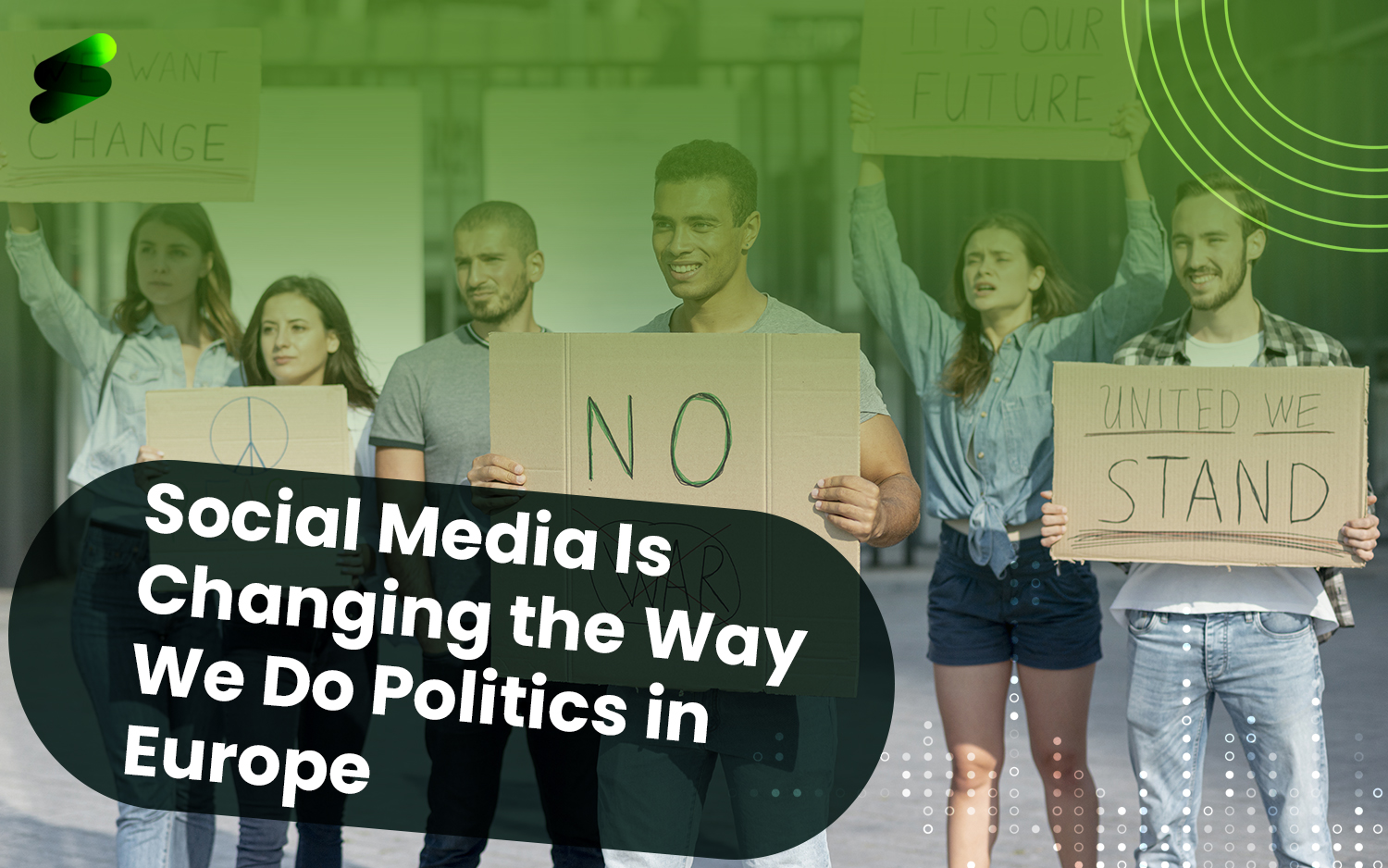 In recent years, social media has changed the way we do politics in Europe. No longer is it necessary to rely on traditional news sources to stay informed about what is happening in the political arena. With the click of a button, we can now access a wealth of information and opinion on the issues that matter to us. This increased access to information has made us more engaged in the political process.

We are no longer content to sit on the sidelines and let others make decisions on our behalf. We now have the power to speak up and be heard on the issues that matter to us. However, this increased engagement has not always been positive. In some cases, social media has been used to spread misinformation and hatred.

But, overall, social media has been a force for good in the world of politics, giving us a greater voice and a more direct way to hold our elected representatives to account.

#1. Social media is giving rise to a new generation of politicians.

They are using social media to connect with voters, share their views on the issues, and solicit feedback from their constituents. This new type of politician is more effective at communicating with constituents and more in touch with the issues that matter to them.

Social media is revolutionising ways campaigns are managed.. In the past, campaigns would rely heavily on television ads and print ads to reach voters. However, with the rise of social media, campaigns are now using these platforms to reach potential voters. Social media platforms such as SocioMee allow campaigns to target specific demographics and interests. For example, a campaign can target Social Media users who live in a certain area and are interested in politics. This allows campaigns to tailor their messages to specific groups of people. In addition, social media allows campaigns to directly interact with potential voters. For example, a campaign can respond to a voter’s question on SocioMee.

This interaction can make a campaign seem more relatable and trustworthy to potential voters. Finally, social media can be used to raise money for a campaign. For example, a campaign can create a fundraiser on Social Media Platform

This allows people to donate money to the campaign without having to attend an event or meet with a campaign representative. Overall, social media is changing the way campaigns are run. With the ability to target specific demographics and interests, campaigns can now reach a wider audience than ever before. In addition, social media allows campaigns to directly interact with potential voters, which can make the campaign seem more relatable and trustworthy.

Finally, social media can be used to raise money for a campaign, which can help the campaign reach its financial goals.

#3. Social media is increasing transparency and accountability in politics

This increased transparency and accountability has led to a more democratic process and has made politicians more responsive to the needs of their constituents.

Rise with the new social world

#4. Social media is giving a voice to previously voiceless groups

For example, the #MeToo movement has given a voice to women who have experienced sexual harassment and assault. By sharing their stories on social media, they have helped to expose the scale of the problem and have inspired others to speak out. Similarly, the Black Lives Matter movement has used social media to share stories of police brutality and racial injustice, which has helped to spark a national conversation about race and racism.

Social media has also been used to highlight the experiences of other groups that are often overlooked, such as the LGBTQ+ community, disabled people, and mental health sufferers. By giving a voice to previously voiceless groups, social media is helping to create a more inclusive and understanding world.

#5. Social media is changing the way politicians communicate with the public

This new form of communication has allowed politicians to connect with voters on a more personal level and has given them a way to bypass the traditional media.

#6. Social media is being used to influence elections

In this context, social media is playing an increasingly important role in the election campaign.

All the major political parties in the European Parliament have active social media accounts, and there are numerous dedicated campaign pages and groups. Popular social media is being used to reach out to voters, with the hashtags #EUelections2019 and #thistimeimvoting trending in the lead-up to the vote. Social Media Platform is also being used to target voters, with political ads appearing in users’ news feeds. The use of social media in the EU elections raises a number of important questions. Can social media be used to promote democracy and engagement in the European Union? Or will it simply amplify the voices of populists and Eurosceptics?

On the one hand, social media is providing a platform for a more open and democratic debate. In the past, European elections have been largely ignored by the general public, but the use of social media is helping to raise awareness and engage voters. On the other hand, there are concerns that social media is being used to spread disinformation and manipulate public opinion. A recent study by the University of Warsaw found that nearly a third of tweets about the EU elections were generated by bots. There is also a risk that social media will simply reinforce existing divisions in society.

A study by the Oxford Internet Institute found that people are more likely to be exposed to political content that agrees with their own views. The use of social media in the EU elections is a complex issue, but it is clear that social media is playing an increasingly important role in the campaign.

#7. Social media is being used to fight corruption

In Europe, social media is increasingly being used to fight corruption. In Spain, for example, the “No Somos Delito” (“We’re Not a Crime”) movement has been using social media to publicise and protest against the government’s crackdown on protest. The movement has been successful in getting the Spanish government to change its policy on protest. In Greece, the “GreekLeaks” website has been publishing leaked documents that expose government corruption. The website has been credited with helping to bring down the Greek government.

The study also found that social media is playing an increasingly important role in shaping young people’s political views and opinions. Social media is also being used by European politicians to reach out to constituents and connect with voters. A growing number of politicians are using social media to communicate their policies and positions on issues.

#9. Social media is changing the way we think about political parties

In recent years, social media has had a profound impact on the way we think about political parties in Europe. In the past, political parties were largely seen as static and unchanging entities, but thanks to social media, we now see them as dynamic and constantly evolving. This has led to a new wave of political parties across Europe that are more responsive to the needs of their constituents and more in touch with the everyday concerns of ordinary people. One of the most notable examples of this phenomenon is the rise of the Five Star Movement in Italy. This party was founded in 2009 by comedian Beppe Grillo, and it quickly became one of the most popular political parties in the country thanks to its use of social media. The party has no formal membership structure, and it relies heavily on social media to engage with its supporters. This has allowed the party to bypass traditional party structures and connect directly with voters.

As a result of this shift, we are seeing a new breed of political party in Europe that is more nimble, more responsive, and more in touch with the needs of the people. This is a positive development that is sure to have a lasting impact on the political landscape of Europe.

#10.The influence of social media on democracy in 2022

The internet has transformed the way we communicate, interact and consume information. It has also had a profound effect on democracy. Social media platforms like SocioMee have given rise to a new form of citizen engagement and political participation. In the past, people would get their news from television, newspapers and radio. But now, more and more people are getting their news from social media. This has led to a decline in traditional forms of news media, as well as a decline in public trust in institutions like the government and the media.

The rise of social media has also had a profound effect on democracy. In the past, only a small number of people were involved in the political process. But now, thanks to social media, everyone has a voice. This has led to a more participatory form of democracy, where ordinary citizens can have a direct impact on the political process. It has also led to a more open and transparent form of democracy, as social media platforms provide a space for open discussion and debate. However, there are also some downsides to the rise of social media in democracy. One of the biggest concerns is the spread of misinformation.

On social media, it is very easy for fake news to spread quickly and widely. This can lead to people making decisions based on false information, which can have a negative impact on democracy. Another concern is the way social media can be used to manipulate public opinion. In the past, political campaigns would use mass media to reach out to voters. But now, thanks to social media, campaigns can target specific groups of people with tailored messages. This can lead to a more polarized form of democracy, where people are only exposed to information that supports their own views.

Social media is radically changing the way we do politics in Europe. No longer are the days when a few hundred people would gather in a town square to hear a politician speak. Now, thanks to social media, politicians can reach out to millions of people instantly, and engage with them in a two-way dialogue. This is changing the very nature of politics, and is likely to have a profound impact on the way our democracies function in the future.